Find out how to draw an Egyptian Pyramid and Ancient Egyptian figures by visiting the History page.

Knowing about creativity, experimentation and an increasing awareness of different kinds of art, craft and design

Look at the picture above.   What do you notice?   What do you think it shows?  Here's a clue: it's called Portrait of Picasso and was created in 1912 (the same year that the Titanic sank*) by an artist called Juan Gris. It's an example of a style of art called Cubism.

Cubism was developed at the start of the Twentieth Century (we're in the Twenty First Century now) by Pablo Picasso and Georges Braque. Here are examples of their work: 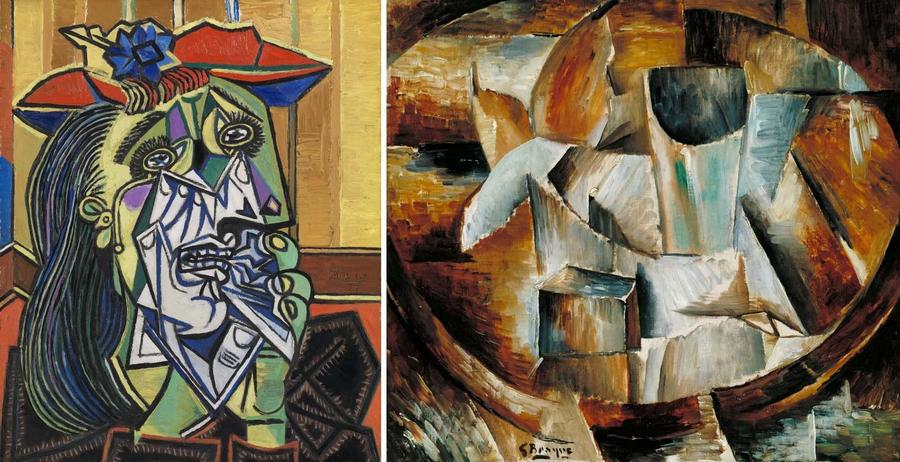 Cubist artists were very interested in the way people see things around them. They tried to create pictures which showed things from different angles at the same time!

Although he did not invent Cubism one the best Cubist artists was Juan Gris (the man who painted Picasso's portrait at the top of this section). Here are some examples of his work:

If you look carefully at Overlooking The Bay you should be able to spot a boat outside in the bay. What else can you see?

You too can create pictures like a Cubist!  Choose an item to make a sketch of (a cup, a pencil, a piece of furniture) then look at your picture again. Can you see any 2D or 3D shapes in it?  If you can, make these stand out. Look at Glass On A Table for good examples of this.

You might want to try your hand at art in the style of Picasso's Weeping Woman. Try to draw a human face as though you can see it from more than one angle. If you're feeling really ambitious, since Cubism is about shape and different faces, you could try something like this:

If you do want to give this a go here are some 3D shapes nets which you might like to print:

* The Titanic was a famous disaster. It was said to be "unsinkable" when it set off on it's maiden voyage (its first trip)...

Unfortunately, early on the morning of 15th April, the Titanic sank. It had struck an iceberg. Although it took hours for the Titanic to sink there were not enough lifeboats for all of those aboard and more than 1,500 people died in the tragedy.  As a result of this disaster today's ships carry enough lifesaving equipment for everybody.  If you're interested you can discover more about the Titanic here.