Thanks to our Geography and History work we know a little about the desert biome. As they are such hostile enironments, deserts are seen as dangerous and mysterious. This means that they are a popular setting for films, books and poetry. Take a look at the poems below (click on the image to see a larger version): 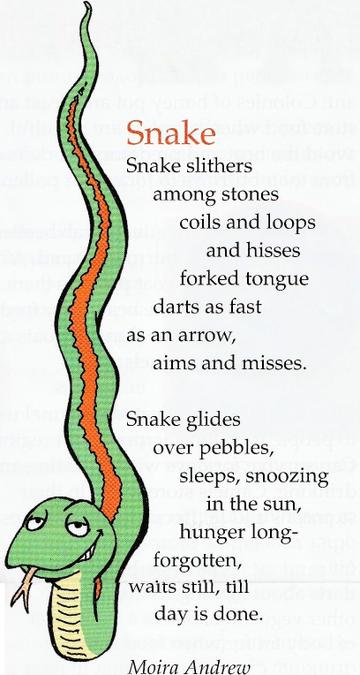 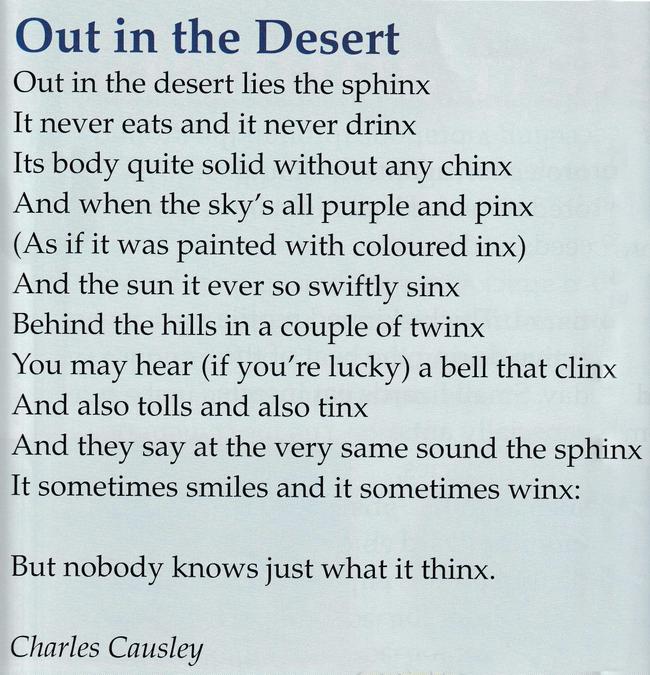 How many verses does each poem have? Do they rhyme? Are they shape poems?

These two poems are very different. Poetry allows you to be creative. Look at Out in the Desert; only sphinx should have an x at the end of the word. Why do you think the poet uses x to end other words too?

Two excellent tools for poetry are similes (look down this page for more details) and alliteration.

In Alliteration words start with the same sound. For example:

You may recognise the astronaut on the front of the newspaper to the left (dated 20th May, 1991).

Can you think of any examples of astounding alliteration (there's one!)? They could be stunningly simple (there's another!). This BBC Video might give you an idea or two.

TASK: Now use the templates below to try your own desert poetry...

Anne Frank - The Diary of a Young Girl

Anne and her family were Jewish and during World War Two the Nazi Party ruled her country. The behaviour of the Nazis towards members of the Jewish faith was extremely cruel. As a result of this Anne and her family had to go into hiding. If they were discovered they were likely to be killed...

You can find out more about Anne Frank with this BBC Bitesize video.

Some years ago (probably even before your parents were born!) CBBC's Blue Peter visited the house that Anne and her family were hiding in. They also spoke to Anne's father, Otto Frank, who survived World War II. You can find this Blue Peter clip here (however, this is a slightly different BBC page so check with an adult first).

TASK: Either use your book or log into your Purplemash account --> Topics --> History --> World War II --> Anne Frank --> All About Anne Frank. Write down key facts about the life of Anne Frank. You might want to mention that her diary is still being sold (and read) to this day, 68 years after it was first published in English!

A noun phrase builds outwards from a noun (can't remember what a noun is? This BBC Bitesize video will help*). For example:

In creative writing a phrase like "the cat" can be a bit boring. This where we can expand the noun phrase, making it bigger and much more interesting. For example:

but, if we expand the noun phrase with additional detail we get something like…

...which is much more interesting, as you can see from the excitement on the face of this grumpy cat…

There are other ways of expanding the noun phrase, of course:

An irritated cat with glaring eyes.

The elderly cat with an enormous frown.

The miserable cat whose eyes were filled with sadness.

These are just a few possible examples. Notice how the noun is still the important part of the phrase. You can’t have an expanded noun phrase without a noun!  If you want to learn more about noun phrases then this BBC Bitesize video is well worth a look.** 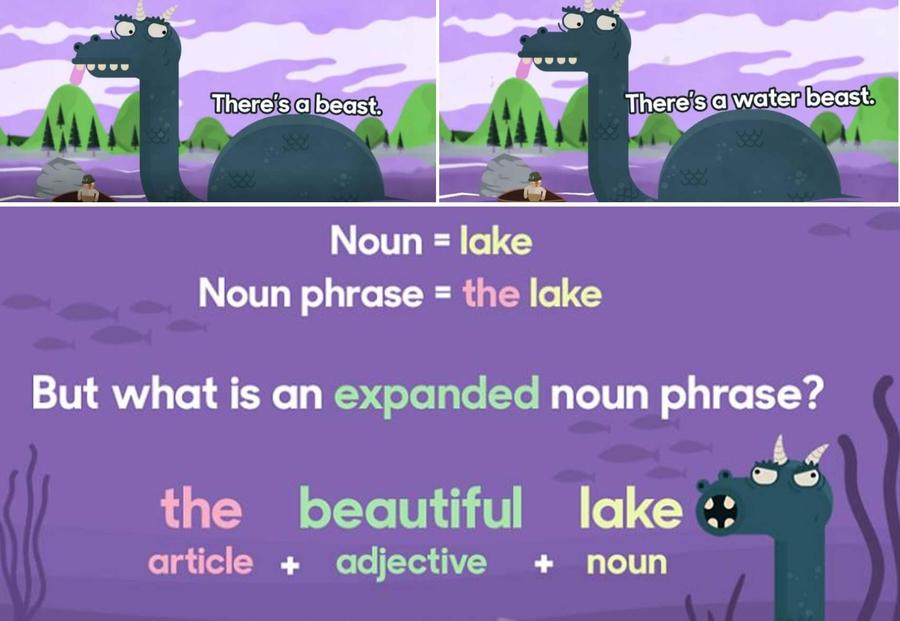 TASK: We're going to try and describe what life on the Apollo 13 spacecraft might have been like (expanded noun phrases and similes are excellent tools to use here).

It was 50 years ago last week that the Apollo 13 Moon mission finally returned safely to Earth (you can find out more about the Apollo 13 mission by looking down the History page).  It had been a difficult mission, but one that started pretty much like any other.

The three man crew were in a capsule on the top of an enormous rocket. The force of the rocket was used to push the astronauts skyward, against the pull of the Earth's gravity. Once in space much of the rocket had done its job.  After the large rocket tanks had fallen away, the part of the spacecraft which actually went to the moon was quite small. These photographs will give you some idea of how little space there was inside the spacecraft.

How would you describe life inside the spacecraft? Comfortable? Cramped? As small as...? As big as...? Lights flickering like...? Buttons and switches covered one wall like...? Write a bank of words/phrases in your book.

After more than two days flying away from Earth, Apollo 13 was rocked by a sudden explosion. You can hear the explosion on the radio in Mission Control (which was back on Earth in Houston, Texas, USA).

The three astronauts on board were over 200,000 miles away from the nearest human beings when the accident happened. Their oxygen was leaking into space and their power was bleeding away. Their spacecraft was dying around them. 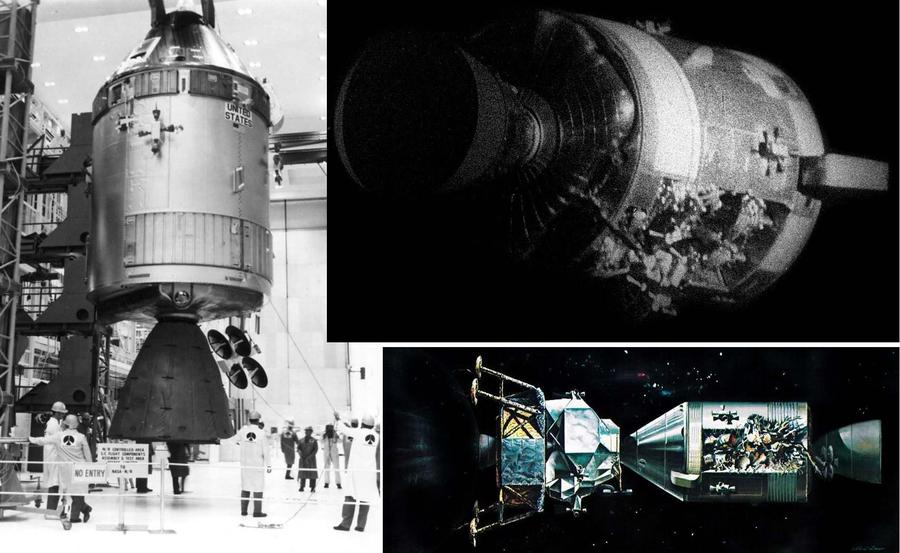 The photograph on the left shows the Command Module part of the Apollo spacecraft. As you can see, it's not large but it had three astronauts living in it on the journey to and from the Moon.  The photograph at the top and the artist's picture below show how much damage the explosion caused. With the Command Module bleeding oxygen and electricity the astronauts were forced to move into the LEM (on the left of the artist's painting). This part of the spacecraft was designed to land on the Moon. It was also designed for only two people but all three astronauts now had to use the LEM as a lifeboat to stay alive on the perilous journey around the Moon and back to Earth.

Try to imagine that you were part of the crew of Apollo 13. What would the launch be like? Would it be calm? Quiet? Fiercely noisy? Violent? Would you be nervous? Thrilled?

You could describe how you feel after launch (excited about going to the Moon) and what you can see through the spacecraft windows. What would it be like living in the cramped spacecraft? Don’t forget that similes and expanded noun phrases would be very useful for description.

Describe the explosion. What would you hear? How you would feel. Would you be worried about reaching home or would you be too busy trying to work out what was happening?

One of the ways the astronauts were forced to save the little power they had left was to turn off the heaters. This meant that the spacecraft was soon freezing cold. Condensation and dripping water began to cover the Command Module's controls and computer. How could you describe these things?

*   Year 3: this BBC Bitesize lesson will remind you about nouns.

** Year 4: this BBC Bitesize lesson will give you further detail about expanded noun phrases.

If you would like to find out more about the Apollo 13 accident, NASA (the people in charge of the mission) have released this video on their official YouTube channel (always check with an adult before you access YouTube).

Similes are excellent writing tools. They help the writer to paint a picture in the reader’s mind. They do this by comparing one thing to another. For example:

The kitten was big.

but if we say:

The kitten was as big as a house!

It's much more interesting!   By comparing the kitten to something people will know it is easier for them to picture what writers are describing.

TASK: Try and think of similes to go in these sentences. Write them in your book.

Similes are used in stories all of the time!   See if you can find any in your reading book.  If you’re feeling especially confident try this task...

* Did you write an orange?   Most people do!

You have a choice!

Imagine you are Eugenie Clark on her visit to the New York Aquarium.  Using similes describe the sea creatures you can see. Think about the variety of creatures, their colours and textures, movements, sizes, etc... How would Eugenie feel about the rainbow of colour she can see in the tank?

2.   Look again at the text Sam Wu Is NOT Afraid Of Zombies

Imagine you are Sam Wu meeting the Zombie Werewolf for the first time. Using similes describe the werewolf and how you feel. Think about the werewolf's size, movement, appearance, sounds, breath, etc... How would Sam feel?   For example, would his heart be thumping like a drum at the sight of the horrific beast? 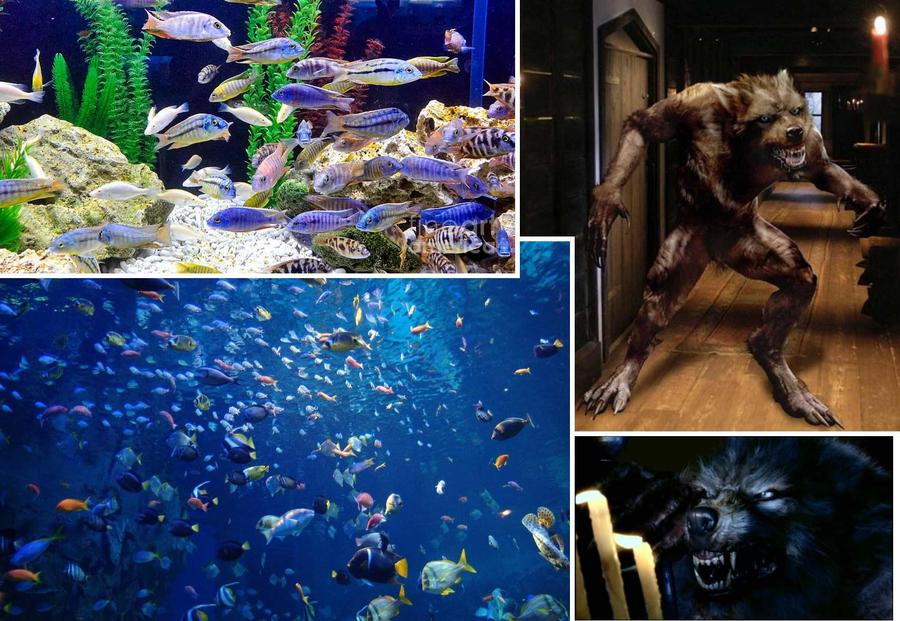