In the 1950s and 1960s Russia and America were competing in “The Space Race”.  Although Russia surged ahead with many successes at the start of the “Race”, by 1969 America was ready to land a man on the Moon. The mission - Apollo 11 – took Michael Collins, Buzz Aldrin and Neil Armstrong to the Moon where, on 20th July, 1969, Neil Armstrong became the first human to step on to the lunar surface. 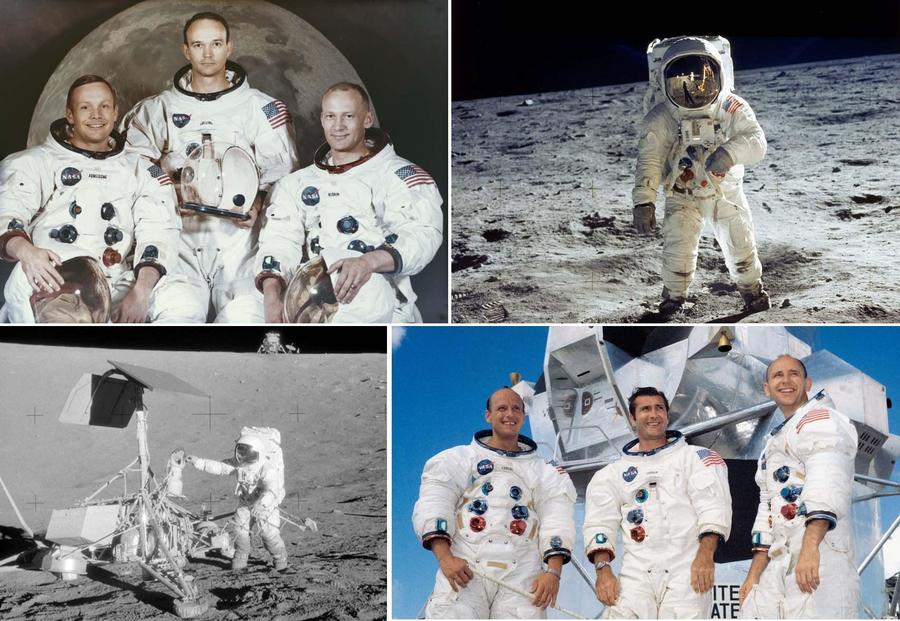 Apollo 12 followed in November 1969, with a new crew: Pete Conrad, Richard F. Gordon and Alan Bean. Both missions returned safely to Earth.   Next to launch was Apollo 13... 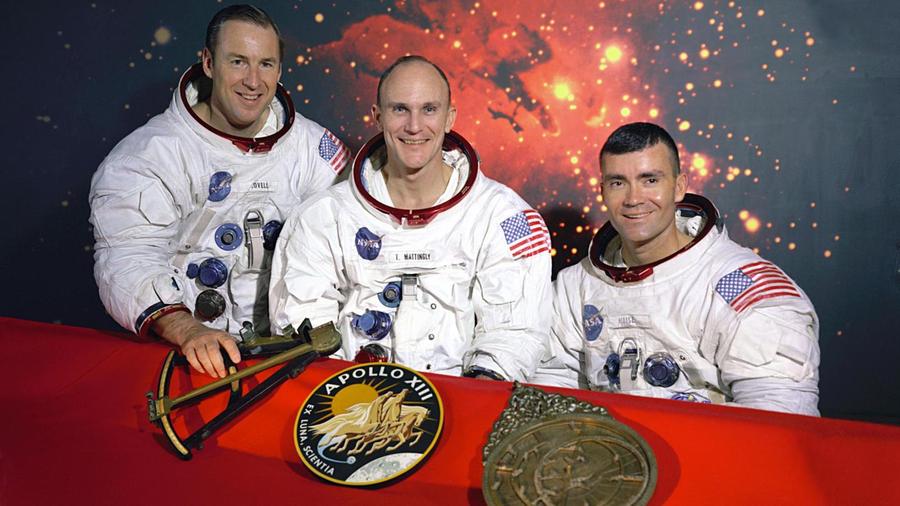 The flight was commanded by Jim Lovell (on the left). The other astronauts on board were Jack Swigert and Fred Haise (you might recognise him from a photograph in our classroom!).  The Apollo 13 mission patch is at the front of the photograph. 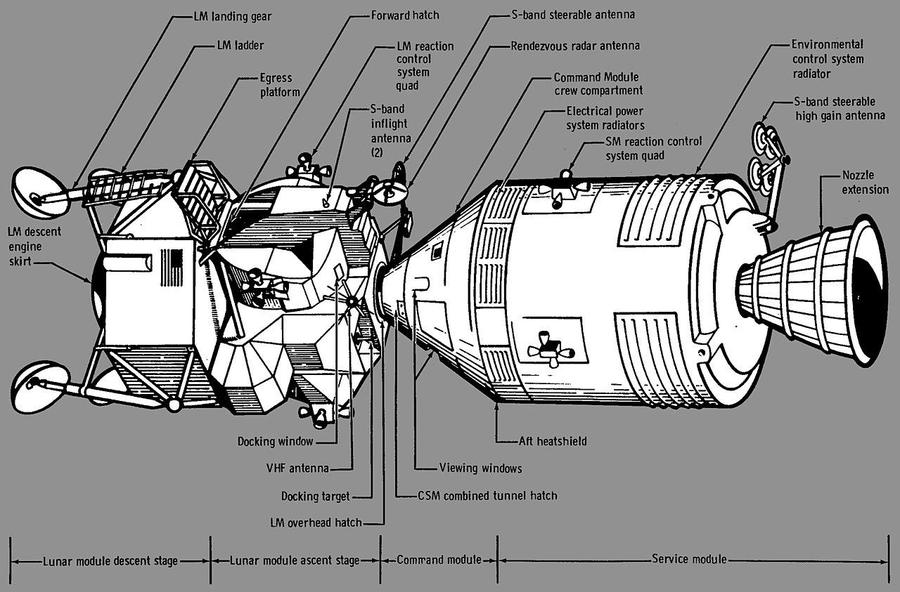 Over two days after the launch (at 55 hours and 54 minutes) disaster struck.   A faulty oxygen tank exploded, and the Service Module (which you can see in the picture above and the photograph below) became damaged, losing oxygen and electrical power.  At first no-one knew what had happened. Had Apollo 13 been struck by a meteorite?  This was always a risk, even though the chances of it ever happening were very, very small.  It was only when Jim Lovell looked out of the spacecraft window and saw the oxygen cloud that the crew realised the problem. This photograph, which was taken days later, shows how much damage had been caused by the explosion. 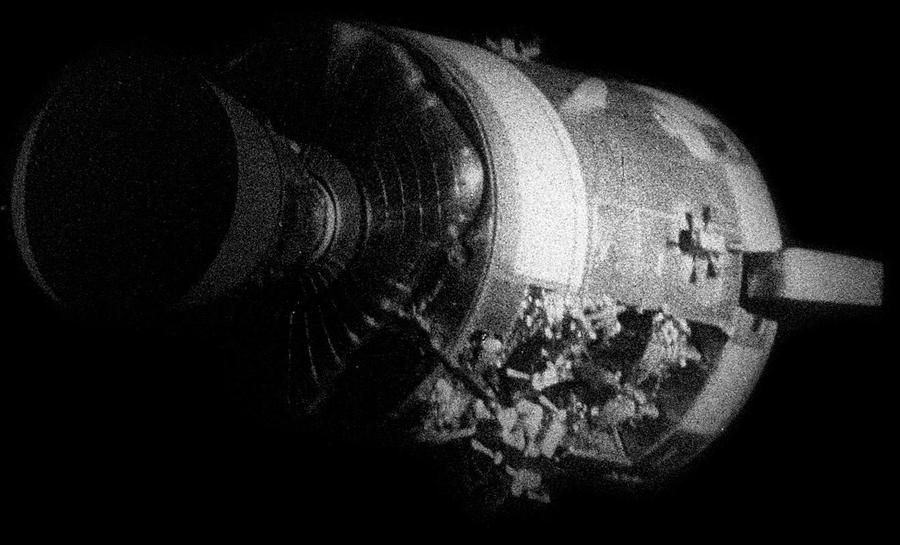 No-one had ever faced such danger before. The three astronauts were half a million miles away from Earth in a tiny spaceship which was quickly leaking the oxygen they needed to breathe. The electricity which kept the spacecraft working was also draining away fast.

People knew that there was a very large chance that the astronauts would die before they could return to Earth. They were very short of oxygen.   This was a massive problem but not only for the reason you might think.   Oxygen was not just used to breathe, on the Apollo spacecraft it was used in a device called a Fuel Cell to make electricity. The astronauts saved their remaining air by turning off almost all of the electrical equipment, including heaters. It became bitterly cold in the spacecraft and condensation formed. Everything in the Service Module was turned off. The problem was, it would need to be turned back on if the crew managed to get back to Earth. With condensation covering everything would the Service Module’s computer work again?

To stay alive the astronauts had to move into the Apollo Lunar Module (the LEM) and make it work as a sort of "lifeboat" - you can see it on the left hand side in the diagram above. The LEM was far from comfortable. Apart from the cold, it was very small, being designed for two astronauts not three.

Nor could Apollo 13 just turn straight round and come home. Scientists decided that Apollo 13 should continue moving away from the Earth. Apollo 13 would orbit the Moon and use its gravity to throw the spacecraft back towards Earth. These photographs were taken as Apollo 13 went around the Moon.

When they finally approached the Earth again on 17th April, 1970 the astronauts were not sure that their parachutes (needed to slow the Command Module down) would work. The parachutes were thrown out by small explosive charges that were fired by batteries. The cold could have made the batteries fail, in which case the parachutes would not work and the Command Module would hit the ocean so fast that all aboard would be killed. That's if they could get the Command Module's condensation-covered computer to switch back on at all!

Luckily, after days of danger, the crew splashed down safely.  This photograph shows them after they were picked up by an American navy ship. Tens of millions of people watched the Apollo 13 splashdown on television.

Some people see Apollo 13 as a failure because the astronauts did not manage to land on the Moon. However, many disagree as scientists succeeded in safely returning three men in a very damaged spacecraft back to Earth.

TASK: Look again at the Apollo 13 mission patch. These patches are worn on the astronauts' clothing (you can see them on the photograph above) and contain key points about the mission. One of these details is the names of the crew. The picture tells a story about the mission too. Commander Lovell wanted the patch to show the Greek god Apollo driving his chariot across the sky (which is why there are three horses). He also chose the words Ex Luna Scientia (which means "From the Moon, knowledge") to show that Science was an important part of the mission.

Knowing what we now know about the Apollo 13 story use one of the templates below (or draw the shape in your book) to design a new mission patch. Think about the key points: the explosion, the LEM lifeboat, the journey around the moon, the people helping to bring the astronauts back safely, the world watching...

There is also a famous phrase that people know from the Apollo 13 mission which you might wish to include: "Houston, we've had a problem." 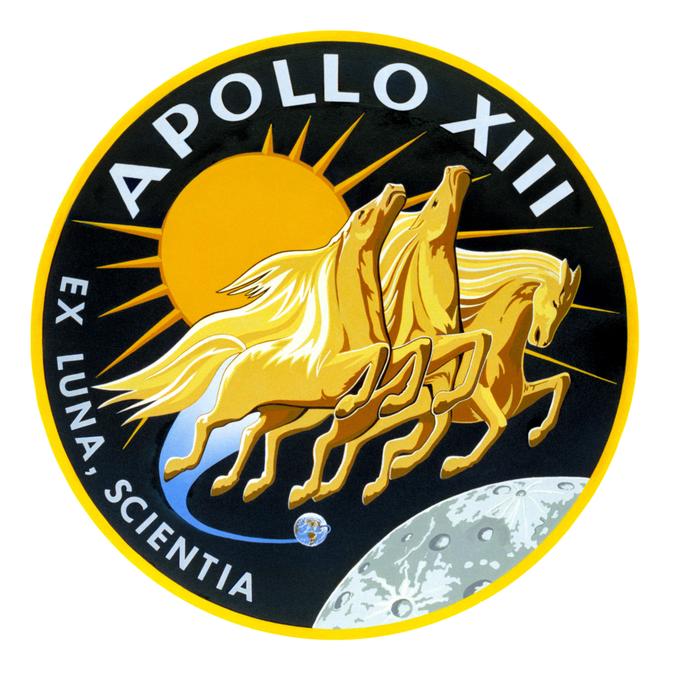 Numerous artefacts survive from the time of the Ancient Egyptians. Perhaps some of the most surprising things to last for thousands of years are wall paintings.

Egyptian tombs were decorated with paintings. These often showed the deceased (the dead person in the tomb) meeting with gods in the Afterlife (the Afterlife was where Ancient Egyptians believed people went after death).   They might also be paintings of things that the deceased had done when they were alive and wanted to carry on doing in the Afterlife. Here is an example. The painting on the left shows an Egyptian called Nebamun hunting birds (while the painting on the right shows his garden).   We can take a good guess and say that these were things that Nebamun enjoyed.

As far as we know these paintings were created straight on to the plaster with a varnish added later to protect them (a bit like when hairspray is used on your pastel art work to stop it from smudging). One of the reasons the pictures have survived so long (and so well) is because they have been sealed in dry tombs away from the weather which might erode them (think about what erosion does to cliffs on the coast).

You will notice that the Egyptian artists had a particular style when drawing figures of people.  They often tried to show the side view and the front view at the same time (you might remember that Cubism had a similar sort of idea!).  You can see this on the papyrus picture above (can you remember what papyrus is?).

In the painting the body of the figure is often seen facing forward while the head is seen looking to the side.  In real life this wouldn’t be very comfortable but it makes Ancient Egyptian art very distinctive – people across the world recognise it straight away.

One thing missing from the pictures is perspective (remember the pyramid drawing below?).  Rather than making people appear bigger or smaller depending on how far away they are supposed to be, Egyptian artists tended to make the more important parts of the picture larger. You’ll notice on the picture of Nebamun's garden above that the trees are presented in a way that’s interesting rather than realistic.

TASK:   Now that you know a little about Ancient Egyptian art why not give it a go?   You could try drawing the figures below. 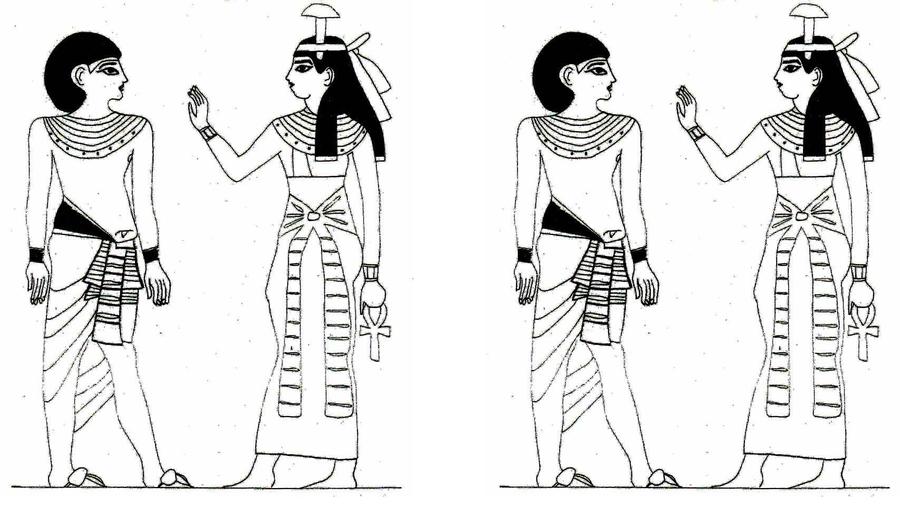 Stuck for an idea?   Try and create a God/Goddess of the River Nile.   Think about the sort of creatures that live in the Nile.   Your God/Goddess could be half human/half creature…

Religion was a very important part of Ancient Egyptian life.  The Egyptians believed in many gods; gods who would take care of every problem as long as they were pleased.

To make the gods happy, the Egyptians built temples (each god had their own) where they could go and speak with priests.   Egyptians would give the priests offerings (gifts) and messages for the gods.   Here are recent photographs of two surviving examples of Ancient Egyptian temples.  They were quite large!

The Ancient Egyptian gods came in all manner of different shapes, often including all or part of an animal.

As these examples show, the gods were responsible for different parts of everyday life too.   You can find out more with this BBC Bitesize video.

TASK:   Choose one or more Egyptian Gods to research.  Draw a picture of your chosen Egyptian God and add details about him/her.   To assist you there are details about the gods Thoth, Osiris, Sekhmet, Anubis and Isis on the same page as the BBC Bitesize video. You could also take a look at these website links:

A large version of the Gods pictures higher up this page can be found in the document below (it includes extra gods!).

This term we have looked at the civilisation of Ancient Egypt. Now would be a good time to take a look at the things you have discovered. One way to do this would be to draw a world famous Egyptian pyramid and surround it (or fill it) with those facts which you have unearthed in recent weeks.   First though, it might be worth trying your hand at drawing a 3D pyramid...

They are quite tricky to master.   We have to get the perspective correct (some parts of the pyramid are further away than others and we have to try and show this in our picture).   Also, since we're not Cubists, we cannot see all of the pyramid's faces in one go...

Luckily, thanks to an internet teeming with talented artists, there are some excellent tools which may be of help: 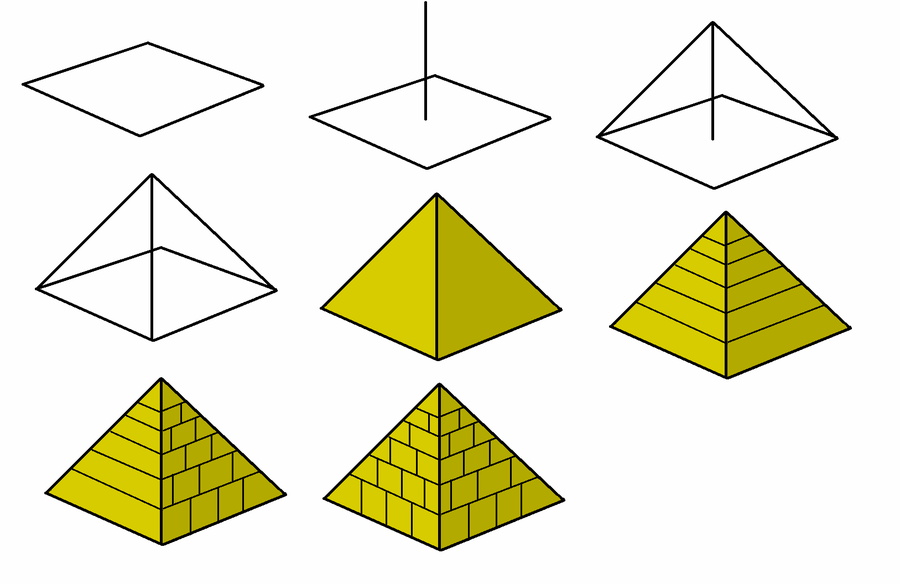 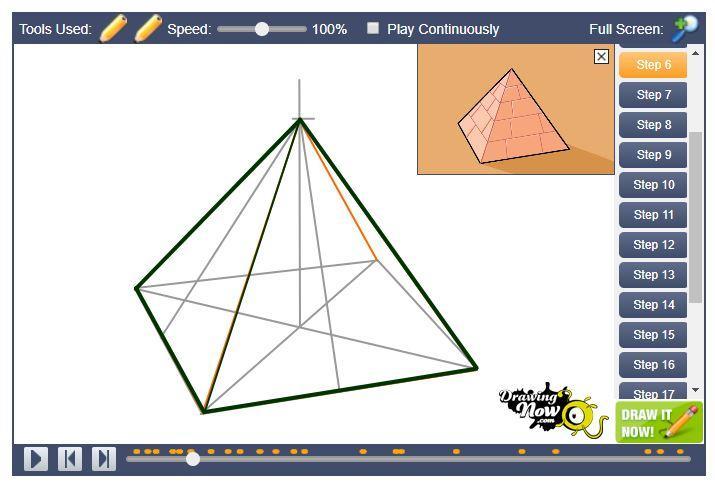 As we know the Ancient Egyptians used hieroglyphs. However, for many years the writing was a mystery, until... 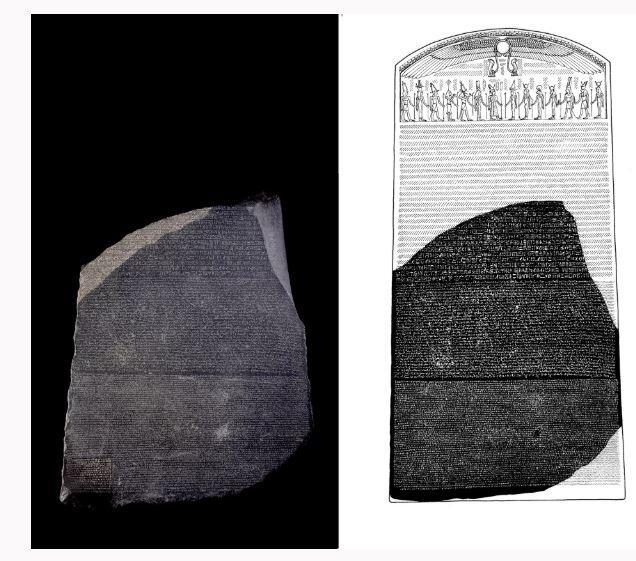 The Rosetta Stone was found (well, most of it as you can see!). It had the same message (known as a decree) in three different languages: Egyptian, Demotic and... which other? This meant that archaeologists could begin to unlock the secrets of Egyptian hieroglyphs. Which is fantastic for us...

Use the key above to write your own secret messages. You could even ask someone else if they can translate your Ancient Egyptian writing (you'll have to let them see the key!).

QUIZ: Where is the Rosetta Stone now?